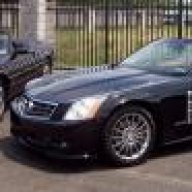 Are there any advantages to owning a 2009 as opposed to one of the earlier XLR's.
There are some great deals out there for the 2009's and especially if it is a used one with low miles and even being certified.

actually makes me wonder about the depreciation of these cars.

By 2009 most problems had been identified and corrected. The 2009 has the latest in the upgrades that Cadillac did for the XLR.

The last two have been the most trouble free. In 2009 the base model is the Platinum edition. With the discounts being offered, it sounds like a great deal.

Since they aren't made anymore, if we hold on to them long enough, the values will start to rise as the cars disappear out of the market.

As Jim said, the '09s have all of the latest and greatest pieces and software in them. They got small styling tweeks done on the interior and Bluetooth. Outside they got new front and rear bumper covers and of course the fender vents. '09 will be sought after in the future because they were the last year and of the one year changes.
Bruce

Life's too short to drive a boring car
You must log in or register to reply here.