A 2015 Cadillac CTS, equipped with V2V technology, notifies the driver of the approaching
Cadillac SRX from the left before the driver could see the vehicle.

In about two years, an all-new 2017 Cadillac vehicle will offer customers an advanced driver assist technology called Super Cruise and in the same timeframe the 2017 Cadillac CTS will be enabled with vehicle-to-vehicle (V2V) communication technology.

“A tide of innovation has invigorated the global auto industry, and we are taking these giant leaps forward to remain a leader of new technology,” Barra said. “We are not doing this for the sake of the technology itself. We’re doing it because it’s what customers around the world want. Through technology and innovation, we will make driving safer.”

Super Cruise, the working name for GM’s automated driving technology, will offer customers a new type of driving experience that includes hands-off lane following, braking and speed control in certain highway driving conditions. The system is designed to increase the comfort of an attentive driver on freeways, both in bumper-to-bumper traffic and on long road trips.

V2V communication technology could mitigate many traffic collisions and improve traffic congestion by sending and receiving basic safety information such as location, speed and direction of travel between vehicles that are approaching each other. It will warn drivers and can supplement active safety features, such as forward collision warning, already available on many production cars.

As the world becomes more congested and new populations need access to personal mobility, accidents continue to be a global concern. A recent National Highway Traffic Safety Administration study estimated that the economic and societal impact of motor vehicle crashes in the United States is more than $870 billion per year.

“Advancing technology so that people can more safely live their lives is a responsibility we embrace,” Barra said.

About Cadillac in Canada

Cadillac has been a leading luxury auto brand since 1902. In recent years, Cadillac has engineered a historic renaissance led by artful engineering and advanced technology. More information on Cadillac can be found at Cadillac Canada | Luxury Cars, SUVs, and Crossovers.

About General Motors in Canada

Headquartered in Oshawa, Ontario, General Motors of Canada Limited (GMCL) employs more than 9,000 people across the country and is a recognized leader in green manufacturing. GMCL markets the full range of fuel-efficient Chevrolet, Buick, GMC and Cadillac vehicles and related services through Canada's largest automotive dealer network. More information regarding GMCL models can be found at GM Canada | Cars, Trucks, SUVs, and Crossovers | General Motors, or by following @GMCanada on Twitter.

"Let your plans be dark and impenetrable as night, and when you move, fall like a thunderbolt." - Sun Tzu
C

So basically, this new technology will supplement the skills driver's education classes reinforced and supplement what our eyes are used for, --or at least what they're supposed to be doing when drivers are texting, checking "critical" email, or perusing the latest "important" news on their smartphones as the drive amongst other equally distracted drivers. This begs the question: When did paying attention ever go out of style?

Part the problem driving this technology is the automakers incessant pandering to our self-absorbed connectivity cravings by installing more and more attention-distracting interfaces in vehicles. Has Cadillac abandoned voice-controlled technology the XLR pioneered?

Do we need self-driving cars to save us from ourselves? Apparently so. (Chauffeurs and long-haul truck drivers take note.)

I am in no way a technophobe, but at what point should we give up driving and take the bus before we need this type of technology? Will this system react faster than some guy who is impaired (or whacked out of his mind with road rage) that cuts us off and steer us toward a safe haven as we cross a narrow bridge with oncoming traffic during rush hour? Obviously, this system would be more effective if ALL vehicles were using it; and that could be awhile, unless the government mandates it like seatbelts or airbags.

But even then . . . The liability issues that GM seems to be entertaining as they progress into unexplored territory could bankrupt them as victims complain that their cars aren't smart enough to avoid injuries or fatalities. (Everyone seems to have an excuse when they're dead wrong and can't admit it due to misplaced pride.)

When fully implemented, driving won't be a pleasurable experience anymore, because. . . we won't be driving! We'll simply press a GO button with a programmed destination and sit back, hoping some guy with an antique 60's muscle car and a six-pack doesn't plow into us. Antique car owners will be paying hellacious insurance premiums. If fatalities plummet, will premiums be reduced, or passed onto automakers, since it will be their systems fault?

While I figure this is the inevitable direction the nanny state wants to cocoon us into for our own protection, between the time the early adopters and all vehicles are required to have these systems there will be a horribly expensive (unless you're an attorney) transition period.


What do you think? 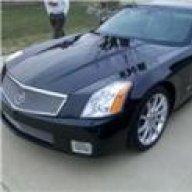 I wonder if a person will be able to turn it off and drive it normally (or abnormally by then)?
xlr-v the car that returns the favor, when you turn it on 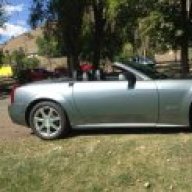 In 1965 I went to the New York Worlds Fair and in the GM building they had a working freeway that cars got onto and entered where they wanted to go. You sat back and the car drove itself keeping speed and distance from others, all done via wires or radio waves imbedded into the freeway surface.

Is this car getting closer to that display now that we have adaptive cruise control and oter things like lane departure warnings via radar, and now these new gadgets?

I think the ultimate justification for this technology will be completely self-driving vehicles designed to protect us from ourselves. I expect systems like the one Cadillac is planning to implement will be remembered as the first major attempt and similar, but more highly advanced systems will be commonplace on new vehicles within twenty years, --once the public warms up to them, and the infrastructure is built to support them. Look how fast cell phone technology was put in place, and we're routinely doing things with phones that were once the exclusive province of super-computers.

For elderly people whose motor and sensory skills would curtail their ability to drive, or for physically-disabled people, these types of systems would allow them a high degree of independence. When mass-adoption of these systems occurs in the not-too-distant future, people will view manual driving as a quaint memory, the way we look at stage coaches. You might go to a track to experience it, but manually-driven vehicles won't be allowed on public roadways. They'll be considered too dangerous and the personal liability too high. The future is coming, and we can't stop it. Personal travel will be controlled by networked vehicles, routed and controlled for maximum efficiency and safety.

Cadillac's vision will be a cool novelty soon. Eventually, it will be the norm.

What are your thoughts?