The XTS Platinum Concept was designed from the inside out, re-imagining the luxury sedan as a personal headquarters, built for efficiency, luxury and connectivity. The concept introduces a new approach to in-car electronics that improves the form and function of the car’s entertainment, navigation and information systems.

“The XTS Platinum concept is the next expression of Cadillac’s Art and Science execution philosophy, reflecting our drive to deliver the latest innovations in the most artful manner,” said Bryan Nesbitt, Cadillac general manager. “We envisioned this concept as an automotive personal headquarters, using advanced technology to enable new levels of connectivity and luxury.”

Traditional luxury sedans were defined by elegant interiors and Cadillac’s XTS Platinum Concept propels that formula into the future. It delivers new approaches to luxury within a design that combines fine craftsmanship with customer-driven innovation. Like the current Platinum Edition products, such as Escalade Platinum and the STS and DTS Platinum sedans, the interior is based on hand cut-and-sewn materials. The XTS Platinum Concept injects more contemporary forms and themes into the interior design, including the use of Organic Light-Emitting Diode (O-LED) displays in place of traditional gauges and screens.

The concept previews a new integration philosophy guiding the development of future models with respect to in-car electronics. The intent is to progress Cadillac’s intuitive in-car electronics systems, typified by the deployable touch-screen navigation system that has been highly acclaimed in the brand’s CTS and SRX product lines. The XTS Platinum Concept previews this strategy via the minimization of traditional buttons and switches. Designers blended the display screens into a flowing instrument panel. They call it a “dead front” design, because the panels appear black until the car is turned on and the screens illuminate. The instrument panel itself reflects the XTS Platinum’s other focus – uncompromising luxury and attention to detail on the interior.

“The Platinum distinction in Cadillac means the fullest extent of luxury and technology and we’ve tried to reach even further with this concept,” said Clay Dean, Cadillac design director. “Just as the technology pushes the boundaries of what a Cadillac can offer, so do the details that make the XTS Platinum Concept an uncompromising experience.”

The interior takes inspiration from nature, specifically the intricate layers of petals that combine to form an orchid. Cadillac designers translated that into a layered and detailed interior. Light cream is the cabin’s primary color and is contrasted with darker elements, such as the steering wheel and an overhead console motif that runs the length of interior’s roof. The console is made of a richly finished wood and houses lighting features.

Premium leather seats include a new style of automotive suede, with a laser-etched pattern. The patterned material adorns the center sections of the seats and accents the door trim. Thoughtfully detailed stitching is used throughout the interior, including the seats, instrument panel and door panels. Passengers in the spacious rear compartment of the XTS Platinum Concept also have access to the car’s connectivity feature, along with a range of infotainment choices.

“We never lost sight of the fact that a large luxury sedan needs to be spacious and accommodating,” said Dean. “Passengers will find generous headroom, legroom and knee space, along with the technology elements that make the drive more productive.”

A new proportion
The XTS Platinum Concept has a distinctive proportion that transcends the traditional aesthetic of luxury sedans and carries the brand’s Art and Science design in a more progressive manner. The unique proportion supports the “inside out” design priority, while creating a sleek profile that complements the car’s advanced technology elements and necessary aerodynamics.

“The XTS Platinum Concept design artfully conveys its focus on functionality through technology,” said Dean. “It is the antithesis of the conventional three-box sedan, suggesting the active evolution of Cadillac’s design language.”

Like the interior, the exterior elements are precisely tailored and elegantly detailed. Brushed billet aluminum trim is used selectively and the 20-inch, 11-spoke wheels feature a brushed aluminum face accented with bright inserts within the spokes. The wheels are wrapped with special Bridgestone tires that were created specifically for the XTS Platinum Concept.

Signature elements essential to Cadillac’s Art and Science design language include vertical headlamp and taillamps, with integrated light pipes and richly detailed lighting components. The headlamps feature light-emitting diode technology for bright illumination that requires less energy, as well as Cadillac’s Adaptive Forward Lighting technology, which turns the headlamps with the direction of the front wheels for greater visibility in turns.

Purposeful and efficient performance
The XTS Platinum concept’s plug-in hybrid electric propulsion system (PHEV) builds on the experience Cadillac has gained with the Escalade Hybrid and Escalade Platinum Hybrid flagship models. The plug-in capability boosts the car’s electric-only driving capability, offering additional battery energy capacity and enabling it to recharge from a standard external electrical outlet. The key benefit of external plug-in recharging is that in many situations – such as overnight parking – the battery can fully recharge in roughly five hours while the car is not in use. The plug-in system operates at maximum efficiency when operating on power the battery has drawn from the electric grid. In some conditions, such as urban commutes, drivers can experience efficiency that doubles that of conventional hybrids.

At higher speeds or when conditions demand it, such as brisk acceleration, a combination of engine power and electric power or engine power only, propels the vehicle. The combination of the Direct Injection V-6 engine and the PHEV system featuring fully electric variable drive provides a spirited driving experience. The system provides an estimated 350 horsepower (260 kW) and 295 lb.-ft. of torque (400 Nm).

“The XTS Platinum Concept was designed to deliver an engaging driving experience without compromising the functional features, space and comfort customers seek in a luxury car,” said Nesbitt. “It is a new vision of luxury that uses advanced technology to deliver functionality efficiently and rewardingly.”

About Cadillac
Cadillac has been a leading luxury auto brand since 1902. In recent years, Cadillac has engineered a historic renaissance led by artful engineering and global expansion. More information on Cadillac can be found at media.cadillac.com.

Thats Hot!!! the interior and instrument panel look awsome. This is more like the flagship they should have.

Now you know what is replacing the STS and DTS.
http://www.xlr-net.com/forums/showpost.php?p=15425&postcount=145
L

I'll bet Renee had something to do with that interior.

Where are the grilles on the front fenders?!? LOL!!!

(I hate to say this, but...) Take a look at the interior of the new Buick Lacrosse. Now, you know I love GM products, so don't beat me up on this: It's the nicest I've seen (from GM) in a long time! See http://www.buick.com/lacrosse/2010/pictures/
If they would only use real wood.......

Now, having said that, Ford's new interiors (Supa's new SHO) are superb! Beautifully designed with more than a few gee-whiz features! As a gadget freak, I love the user-controlled lighting schemes! See http://www.fordvehicles.com/cars/taurus/gallery/photos/

Missy Bling's new Camaro is pretty sweet too, inside and out! See http://www.chevrolet.com/camaro-car/pictures/ although I don't see her light-up door panels on the website.

PS That "dead front" design where the instrument panel is black before you turn the key? I had that on my 04 STS!

I have to stop now, or I'll buy a new car online tonight before I go to bed!
http://www.xlr-net.com/forums/showpost.php?p=15425&postcount=145

Cadillac is preparing to launch a new flagship sedan based on the XTS Platinum concept that will replace both the STS and DTS sedans in the luxury automaker's lineup. Our trusty spy photographers recently caught this camouflaged prototype within GM's testing facility, showing that the car has skipped the normal test mule phase and gone right to what's called the IVER – Integration Vehicle Engineering Release – stage.

During its move from concept to production, the XTS has lots its frameless window design in favor of more traditional pillars, including a proper B-pillar construction. Still, the shape and placement of the door cut lines seem to be identical to the concept, as does the rake of the C-pillar.

Since the production XTS will ride on the same Epsilon II architecture that underpins the Buick LaCrosse, expect the production car to be front-wheel drive, though it's likely that an all-wheel-drive variant will be offered once the car hits showrooms. See the prototype for yourself in our high-res gallery below.

Sorry, I see nothing special. Just another CTS look-alike built on an existing frame. 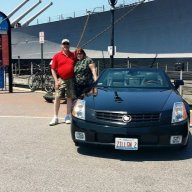 I like it ... beautiful interior. Looking forward to a good size AWD sadan. Hope they have it at the Chicago Auto Show.
Chicago Dave

"Everything in life happens somewhere else ... why not have fun getting there and in style"

Although I would prefer a V8 I could be persuaded if they offer something other than the Suede seats.

What happened to the vents??!!