XLR vs The EVOQ

The issue was debated on this site May 8, and after May 27, an article for the XLR V was made by HAGERTY people, was the issue used for their article?

The base XLR has the Allanté similar engine, more powerful and updated for a rear wheel drive, its power train is excellent and durable for some very long mileages.


The V engine is the same as the EVOQ....the exhaust system is not the same, (for all XLR ).

The suspension seems to be of the corvette as they used the same magnetic S/A, the rear and the front suspensions are very similar then a corvette, the same for the steering rack and pinion.....For the EVOQ, it is unknown.


The body style are very similar, XlR body has a corvette fiberglass type, more cubic, higher, the front and rear ends are not the same, the retractable top is not working the same way, the interior is of a completed different design, all the lamps, the mirrors, and the wheels looks different, (du to the wider wheels), finally the XLR is smaller.... The Evoq body is made of sheets metal with a longer and lower body.

The Chassis on the XLR, is of a shorter wheel base, with some different tracks at the front and rear....The EVOQ chassis is unknown, it could be a GM chassis.


The XLR still a fine car to drive when it is not at the dealership for the electric
problems of all sorts, the car seems to be build in a rush, putting some modules in somes car wells is indicating a not so good vision..... the same for the corvette (AND XLR) problems, with their BCM.


The vital ''no longer available parts'' for keeping the XLR on the road for many years seems to be planned by the car producer, as no help are really given to the owners.

Could the EVOQ would have the same treatment, it looks a reality, remember the GM electric car in the past years, pulling it away from the owners for the salvage yard, for making it a steel cube for the next cars to be build.


Would the CADILLAC EVOQ been build with its steel body as promoted by the medias, the production and the sales of it would have been much better then the XLR, as when the medias found the reality, they were informing the consumers, that actually the XLR is simply and noting more then a luxury corvette, and much too expensive....

My opinion, not producing the CADILLAC EVOQ was a fatal error.....wish the next roadster will be a real CADILLAC made of sheet metal.....

PS all cars insurances have lower some prices presently, because of the present confinement and the less used of the car, rest asuured the insurances people will adjust their prices accprdingly to the utilisation made in the very near futur. 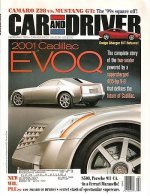 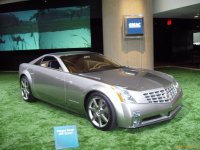 It is not fair to judge the XLR against the EVOQ. The EVOQ was a concept vehicle, it was not a production vehicle. Am am also quite sure had they produced it the way the concept was, the cost would be way higher than the XLR.

Many things on the XLR were used in the six generation Corvettes. There were very little shared components. The complaints of everything today is on a vehicle which is at the least 11-16 years old, on a very low production run.

I had my fun with the two I own over the last 14 years and moved on. I’m sure I’ll do the same with the C7 Z06, when the C8 Z06 variant comes out. It basically comes down to ones ‘tastes’.

From the beganing of the thread I mentioned that this was to compare both cars and not been against the XLR, just like comparing the XLR base model and the XLR V model, in the media this formula is current, we see it almost each day.

I have purchased on eBay the media press kit of the EVOQ and a sales brochure of an XLR.
After reading the press kit, for all the efforts and the energies given on that car by the car builder for the Evoq concept and reading the media magazines, I was surprise that the car builder has rush to build some how the XLR instead of the real steel Cadillac.

The media were positive that the EVOQ would be the choice of the car builder, sadly it did not happened, they choosed the inexpensive way in order to cut the costs to build the car, we know now the results.

The XLR sales were less then the Allanté …. the car builder had no choice to stop the production, as the XlR got the reputation of been a luxury corvette in the $100,000, many buyers said no thanks I rather will buy a corvette for much less money.

It is my opinion only.

I like corvette however I love my XLR and would not sell it even with money that i have spend since for it, as i have previously said, it is a fun car to drive, went it is on the road for it

When you fill-up at the gas station be thankful the XLR is mostly fiberglass and not sheet metal. The EVOQ was pushing 5000 lbs.
I

Not bad for a sheet metal Cadillac EVOQ roadster, their fuel consomption should fairly be the same for both cars.

Yea, you are right. I saw 4200 lbs on the door tag, but that's total acceptable weight with fat lady riding shotgun.
I

That sounds like a lady sitting on the boy friend laps and enjoying the ruff ride for the 3 passengers…..