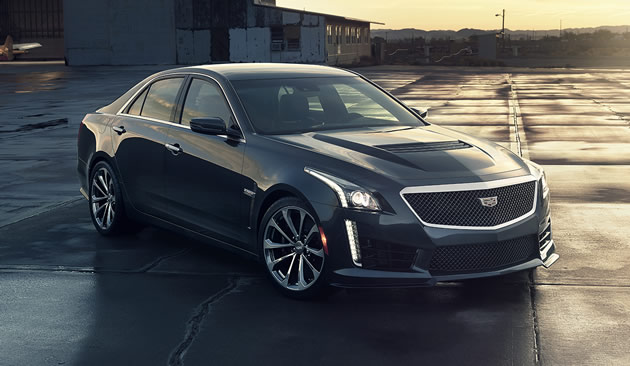 DETROIT – Cadillac announced today that U.S. dealers will begin accepting orders for the next-generation 2016 CTS-V, the all-new high-performance sedan that launches in late summer. The 640-hp CTS-V is the second of two all-new V-Series models to come to market in 2015, following the smaller ATS-V coupe and sedan, which launches in late spring.

Cadillac’s new 2016 V-Series models represent a significant expansion of the brand’s elite, high-performance line. Not only are the new V-Series cars elevated in terms of performance, they now reach a broader spectrum of drivers by presenting two distinct personalities, size categories and price points.

With a top speed of 200 mph and 0-60 performance in 3.7 seconds, the CTS-V is the most powerful car in Cadillac’s 112-year history. The 2016 CTS-V is priced from $83,995. Customers can place orders now with dealers and view additional product information at Cadillac.com.

The CTS-V elevates into the elite group of the world’s highest-performing sedans.

“V-Series represents the pinnacle of Cadillac, a brand that now makes drivers’ cars at the highest level,” said Johan de Nysschen, Cadillac president. “The new CTS-V is essentially two cars in one: a luxury sedan with sophisticated road manners and a track-capable sports car with awe-inspiring performance. This type of car is exclusive, the domain of the few who can access this level of incredible capability. V-Series matches or overtakes the finest cars in this elite class, while being more accessible.”

The smaller ATS-V launch will precede the CTS-V. Also track-capable from the factory, the 464-hp ATS-V features the exclusive Cadillac Twin Turbo V-6 and 0-60 acceleration of just 3.9 seconds. The 2016 ATS-V is priced from $60,465 and presents high-performance capability in both coupe and sedan forms.

Chime in on the forums >>