The Saga of owning an XLR.

Two of the best days of my life were those of buying and then selling a red '04 XLR. It was beautiful; a sight to behold, in all of its red glory. It was a good deal, with what seemed to be average mileage; I mean, with just under 90k miles, it was barely "broken in", right? I should have paid more attention to what was "broken". Both headlight inner lenses were burnt/cracked, and some of the taillight LEDs weren't working, but I had seen other Cadillac models' lights on EBAY, so didn't give it a second thought... I have had many convertibles, and knew to check the top's operation. The tires needed to be replaced, but that was a minor expense, right? I was undeterred by the cell phone worn hole in the drivers' seat bolster (found out that no one would re-cover it because of the air-bag). I was spurred on by the fact that it was a one owner car, and he was teary eyed at having to sell his "baby". He produced some receipts from the dealer, which convinced me that he had cared for it meticulously. So I bought it, and pulled it back on a trailer. The first shock was the cost of the "UN-obtainium" lights (at the time there were new OEM ones on EBAY, selling for $3500. I don't know what they're selling for now, but saw some for $5400, firm!). I found a brand new left headlight at an estate sale (for a 'steal' of ONLY $500), with which I was able to barter for both lights (this was after having the left headlight destroyed by a business trying to replace the badly burnt running light lens; the headlight's plastic housing was brittle, and shattered. The owner was upfront about it, but it still cost me $800). The running lights were replaced with LEDs. I found a place in California that would repair the taillights for $900, with a magnanimous NINETY-DAY warranty! I never did repair the taillights... The next shock was the price of the run-flat tires! The TPMS sensors were bad, and had to be replaced, as well as the outer tie-rod ends. This was just the beginning. The radiator sprang a leak which required that the AC condenser be removed; one of it's fittings was seized, so it was replaced, also. A code was set for one of the engine coils; shortly after replacing it, a second coil went bad, so the rest were replaced. A number of months went by, and I started smelling burnt oil. Oil was dripping from the engine onto the right catalytic converter. (Coincidentally, the check engine light would be randomly lit by a 'right catalyst' code.) It got so bad, that I would pull up to a light, in this attention getting car, as smoke kind of puffed from under the front; alarming, and embarrassing, to say the least! So now I learned about the faults of the "WONDER-fool" Northstar engine. The dealer wanted a mere $5400 to remove the engine (done by lifting the body off of the engine and front suspension) and reseal it; I found a mechanic who was able to do it from under the car, by removing the front suspension; he charged "only" $2100, but kept the car for 7 months. While on the lift, he found that the lower bumper support was cracked, which had to be removed and TIG welded. One day, as I was turning out of my driveway, I felt the rear axle hop; the "sealed" tran-saxle/rear end required service. The steering rack and pinion started leaking and had to be replaced with an expensive used one. The LCD display was washed out, so was replaced with a new one. The drivers' door sagged so hinges were replaced; unfortunately, it was not repaired until after the pristine door sill was scratched by the bottom of the door. The passenger door exterior switch was replaced. Gas filler door latch was replaced; it could only be opened by prying with a credit card. One of the front shocks was leaking: replaced with much more sensibly priced Bilstein's and shock excluding electrical plugs (this was one of many things I learned from this site, for which I am very grateful). Replaced the front brakes and rotors; one of the few things that I was prepared for... I found a drivers' seat, but had to purchase the passengers' as well, which I let go with the car. There was a faded 4"X6" American flag sticker on the trunk lid, which when removed, exposed some scratches; I was quite pleased to be able to fix this, with only my labor/materials and a rattle can of factory spray paint!

The reason I was finally compelled to sell it was, as you may have probably read about on this site, the problem with the roof: the panel de-lamination and the leaking front lock cylinder. Again, if it weren't for help obtained through this site, I was considering drastic measures of disposing of this lovely piece of unusable art. But, thankfully, Cadillac replaced the roof panel at no charge to me, and provided a brand new rental vehicle while the car was repaired; again, THANKS!! The final straw was when the front lock cylinder leaked and stained the headliner. I learned from Top Hydraulics (referred to me by this forum...thanks!), that once one cylinder goes, the others aren't far behind. So, they repaired the cylinder, I replaced it and the headliner, and sold the car, having driven it less than 8K miles in 4 years. I gave the buyer a good deal, and informed him of everything that I knew about it. He made it the six hours to his home, returned my tag, and that's the last I've heard from him.

And that, boys and girls, was the second best day of my life! I have since purchased a much more practical, low-mileage, well cared for and un-abused, locally owned, red, '99, diesel, dually, crew cab, truck (huge, compared to the XLR), and low-boy trailer, neither of which have given a minute's trouble; BUT IF THEY DO...I have already verified that parts are available, and that if something were to break, I can work on it, and not have to spend a significant portion of my savings to do so!!!

So, thanks again for all of the help from past and present forum contributors! I would say, good luck to all, but someone has already said, and I quote, "Luck is for the lazy. Success is for those who work hard."

That story is ALMOST as sad as mine.

QUOTE: "I was spurred on by the fact that it was a one owner car, and he was teary eyed at having to sell his "baby". 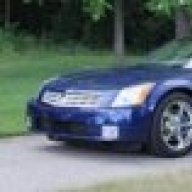 pure zen said:
QUOTE: "I was spurred on by the fact that it was a one owner car, and he was teary eyed at having to sell his "baby".

Best wishes for you and your crew cab truck
Click to expand...

So sorry to hear your experience with your XLR was such a nightmare. Bluebeast has given us a little trouble since our purchase, but nothing we could not handle without this sites great input to the problems. We have really been blessed with mostly pure top down pleasure. Hope you enjoy the new toy! Bluebeast, Cathie and Paul
I

Well said and thanks for the story of your XLR.

If the new owner reads your thread he will reconize you and will be aware of the maintenance and repairs of an XLR are not cheap.

What keeps us to carry on with our XLR, is that this car today still look likes a new model of Cadillac, when people gets to know the model year they think that you try to fool them.

This is a way to get back our money spend for this Art/Science great sports fun car to drive, with the top down on sunny days. ( when it works )

Good Luck with your new toys.

One of the reasons I overpaid and got a low mileage XLR.
If it explodes in a burst of broken stuff now, I got 4 or 5 good years out of it.
G

Wow...i started reading your story and its depressing....
I love my XLR because it was Loved and it';s Loved even more now!
I love driving it...top down and lots of compliments!
R

Wow, That's the worst run of bad luck I've heard in a long while. I have been blessed with few problems since purchasing my 08. I actually expected more trouble than I've had. Key fob problem was my fault (went through washing machine). A few other minor glitches. but nothing to dampen the joy of driving.
You must log in or register to reply here.