The front-drive Allante two-seater was designed to compete with the rear-drive Mercedes-Benz SL two-seater, which was the world's most luxurious, prestigious two-seater from a high-volume automaker.

But the Allante was poorly marketed, too heavy and underpowered until the 1993 model was given Cadillac's modern new 295-horsepower Northstar V-8.
By then, though, Cadillac decided it had become too costly to build the car, and dropped it after 1993. Everyone thought Cadillac was out of the sports car business for good.

Industry critics said the only really good Allante was the 1993 model, although it looked nearly identical to the 1997 car, and that General Motors again was dropping a car after it had developed a really good version of it.

The market subsequently changed a lot, with a Lexus two-seater among new Cadillac rivals. Even Mercedes came out with a second sports car, the SLK.

Cadillac thus decided to introduce an advanced rear-drive two-seater with plenty of luxury and power.

Called the XLR, the new Cadillac debuted for the 2004 model year (Sept. 15, 2003, AutoTimes). It shared its chassis and structure with the revered Chevrolet Corvette and even was produced in the same plant, using plastic composite body panels.

The XLR had unique styling that made it look both racy and classy, a sophisticated 320-horsepower Cadillac Northstar V-8, a suspension tuned for a smoother, more adaptable ride than the Corvette's and even a retractable hardtop.

The first XLR got good reviews from auto buffs and has had steady sales. Cadillac estimates that about 3,300 XLRs will be sold this year, with 2,917 sold through November.

In early 2006, Cadillac added a supercharged, intercooled 443-horsepower "XLR-V" model with a 4.4-liter V-8 engine hand-assembled at GM's Performance Build Center near Detroit by a single craftsman. The standard XLR Northstar has a 4.6-liter V-8, but Cadillac has reduced the displacement for the sake of engine block durability.

Cylinder heads are new, and so are heavy-duty pistons and stronger connecting rods. In fact, the XLR-V has almost a new engine.

I found during a recent test of the XLR-V that its high-horsepower version of the 320-horsepower V-8 makes the very fast XLR much faster. It does 0-60 mph in 4.3 seconds, and reportedly hits 100 mph in 10.4 seconds. But the XLR-V is easy to drive casually on a daily basis and is a smooth, tranquil highway cruiser.

Why all the extra horsepower? After all, XLR buyers aren't the sort of folks who buy a turbocharged Porsche 911 or a race-style GT3 production version of that Porsche. The reason is that Cadillac rivals offer higher-priced, high-performance versions of their specialty cars, so Caddy must remain competitive.

In any case, the extra power and torque especially help during merges into fast traffic and passing on highways, making such maneuvers seem virtually effortless.
Cadillac says the XLR-V is the "quickest, most agile and most exclusive Cadillac ever offered."

Both engines work with an alert six-speed automatic transmission, which helps both performance and fuel economy. The transmission has driver shift control, which really isn't needed with the added power and all those transmission speeds.

The XLR-V delivers an estimated 15 mpg in the city and 22 on highways, compared with 17 and 25 for the XLR. Cadillac recommends premium fuel for the XLR, and requires it for the XLR-V.

The XLR lists at $78,080, while the XLR-V costs $97,460 after recent price adjustments. Besides its extra power, the XLR-V has leather/suede upholstery, a sport suspension, larger brakes and wider tires on larger 19-inch (vs. 18-inch) wheels.

That equipment is added to the standard comfort, convenience and safety equipment of the base XLR, which has enough items to choke a plow horse. So many, in fact, that the XLR has no options.

Among XLR features are traction/anti-skid control and run-flat tires. The XLR-V has a firmer version of GM's automatic adjusting Magnetic Ride Control found on the XLR. Also standard for both versions are side air bags that cover the torso and head and heated/cooled seats. A screen on the dashboard displays audio and navigation functions.

Adaptive cruise control automatically keeps the XLR-V a safe distance from a vehicle ahead, and the car has keyless locking and engine starting.

The XLR-V's good handling enables it to tackle winding roads, but it isn't as hard-edged as the Mercedes SL in such driving. The variable-assist steering is precise, but could use more road feel. The ride is supple over all sorts of road surfaces, and braking is strong -- although the pedal feels rather soft.

Long doors make it easy to get in and out of the luxurious interior, but are awkward if the car is parked in a tight spot. Some tall drivers will wish their seat moved back farther, and the cockpit is only moderately roomy because of a large console.

Gauges can be easily read, and controls are logically placed for no-fuss operation, although radio and climate controls should be larger. Inside push-button door releases are gimmicky, but the retractable hardtop allows a quiet interior when raised.

The trunk is rather shallow because of the hardtop mechanism, but holds two golf bags.

The XLR-V clearly is for affluent grown-ups, and shows that Cadillac is capable of building a world-class auto. 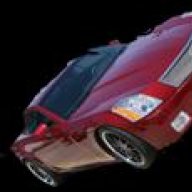 M
Howdy from the desert SW!
2