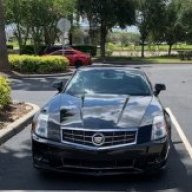 A couple notes from my experience which differs from the guy in the video. Note, the below may not make sense unless you watch the video. First, when it came time to take out the key from the old FOB to put into the new FOB, I struggled mightily (unlike the guy in the video). Once I got the screw out, I had a hell of a time trying to pull that key, so, I soaked the key in hot water then applied some heat (using my mother-in-law’s hair dryer) then kissed the base of the key with WD40. Using a bit of elbow grease, she came out.

Finally, I removed the Cadillac emblem on the old FOB, as instructed in the video. But, I filed ALL of the adhesive off of the emblem so that it was smooth. My wife (being a cosmetic tattooist) suggested I use E6000 liquid adhesive, which I did, to glue the emblem onto the new housing unit - well, she actually did that part - she has steadier hands.

Anyways, thought the above may help.