The first day of our trip, about 700 miles and pulling into our first stop I noticed a metallic sound. Raised the hood and all three belts are shreaded, but amazingly still turning the pulleys so I had no indication on the dash that there was a problem. I thought I could just replace the belts and get back on the road, but then I found out that no one stocks belts for the V, even worse one of the belts had worn a piece of one of the water hoses away. Talked to three different Cadillac dealers around the country and got the belts on order from the factory. I then pulled off the remaining part of the belts to find the power steering pulley, the one that drives the supercharger, was loose and rubbing against the power steering pump, that's where the metallic noise was coming from. Called roadside assistance and had the XLR towed to the nearest dealer. Car needs a new power steering pump. None available from GM. We rented a car and are continuing our trip, no idea when the XLR will be repaired. Hopefully the rest of the trip will be better, even though we are now driving a minivan. Everyone with a V, you might want to keep a set of belts around, even though that wouldn't have helped us this time.
[SIGPIC][/SIGPIC]
2006 Infared XLR-V built 4/2006, Sold new 8/24/2006 @ 36 miles. Purchased as second owner 7/22/09 @ 40,151 miles, as of 3/2018 81,862 miles
Ligenfelter Varimax PWM Intercooler Coolant Pump, D3 Stage 1 & 2 Intake, Wait4me tune, Texas Mile 154.6 MPH 10/26/2012
Other Caddys: 1990 Red Allante 154,000 miles

Wow, have not heard THIS before. I had belts replaced on my '04 but I had plenty of noise warning before any damage was done.

Wow, with five big trips and one half big trip, 23,000 miles, I feel really lucky. Have really not had any major problems on my '06, maybe because I choose the regular rather than the V. The V has more things on it to go haywire. Sorry to hear you had so much trouble all at one time. Hope they get it fixed like brand new for you.
Robert (BB)

Hmmmmm, I think this may have added some weight as to which car to dump between the "V" and the Vette. . .

XLR-V Lover said:
Hmmmmm, I think this may have added some weight as to which car to dump between the "V" and the Vette. . .


Dump the sedan, if you need to haul something you can always rent a truck for the day.
Robert (BB)

Well, I wanted an XLR and already have a STS with the 4.6 L Northstar which has been a fine and reliable engine and there are enough cars out there with that engine that parts really should not be a problem. The V came along for not too much more money than the XLR I was looking at and the thought of 440 HP for about the same price overcame any negatives. Bruce ran the repair history for me before I bought the V and I saw where the power steering pump and pulley had both been replaced in the past so now I believe there is something with this particular car that is causing this, I just wish it would not have happened on our trip. The real problem here is the lack of repair parts. They don't know when they will be available to fix my car. My car is now 700 miles away from where I live and whenever it gets fixed I will have to take have someone drive me back there to pick it up. I also will have about a $800 car rental at my expense because the car the dealership gave me to drive was unacceptable (to me) for the remainder of my trip, another 3000 miles or so. We are making the best of it, but I doubt now that I will be driving the V anywhere more than about 200 miles from home in the future, will just take the STS in the future.
[SIGPIC][/SIGPIC]
2006 Infared XLR-V built 4/2006, Sold new 8/24/2006 @ 36 miles. Purchased as second owner 7/22/09 @ 40,151 miles, as of 3/2018 81,862 miles
Ligenfelter Varimax PWM Intercooler Coolant Pump, D3 Stage 1 & 2 Intake, Wait4me tune, Texas Mile 154.6 MPH 10/26/2012
Other Caddys: 1990 Red Allante 154,000 miles 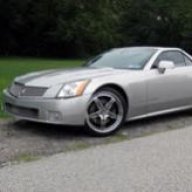 onalaska said:
Got some great news yesterday! The part came in for the car and it is repaired. Neither the dealer or GM expected the part to come in, but it showed up at the dealership and they installed it yesterday. Now all I have to do is find someone to drive me 700 miles to pick it up and drive it back home.
Click to expand...

For what its worth... once you factor in your time, the wear on your car, cost of gas, etc... I wonder if wouldn't just be cheaper for to pay to get it transported to you. Typically a transport for that short distance should only cost a few hundred dollars... if not just a couple of hundred... and since its at a dealership, I bet getting it transferred to a dealership close to you should be fairly easy.

onalaska said:
Hi Richard, I thought about that and it would probably be less than the one way airline ticket. I just want to go get it myself and get it back home. Interested in a road trip to Kansas?
Click to expand...

I just looked up Coldspring, Tx - go figure.. you're 60miles from me.

I've actually never been to Kansas, although I don't think I'm really up for a 1,400 mile round trip right now. Sorry.

It's finally home. Just in time for a local car show this weekend. After a 1400 mile marathon drive in rain and fog most of the way my wife's STS is now the color of dirt. The XLR was spared most of the rain on the way home today. I drove it like it had an egg under the pedal, checking the belts and pulleys every few hundred miles. Didn't want any chance of a problem on the way home. One of the coolant hoses had a gash in it from the belt flying off when the pulley came loose. The dealer had the new hose, but didn't replace it for some reason so I was really worried about that, but it held.

The dealer said the pulley came from Ontario Canada. GM called me a few days ago and said the part would arrive at the dealers tomorrow! I guess they had parts coming from several directions. They were unaware of the one coming from Canada.

I'm glad you both are home.
Bruce

Life's too short to drive a boring car
You must log in or register to reply here.