Is the XLR just another Allante?

Yes, I think that one is for sale or was, down here in West Palm Beach Florida for the longest time on Craigslist. This may be it. That yellow is not a common color.

Enclosed is a photo of a Maserati/Chrysler design that looks like a Baron with the removable top on….not the same car with this roof removed.

Ian, Even though this car came out after the Lebaron the Lebaron was designed after this car. Because the launch was held up by over a year with poor quality they used this car to design the Lebaron. My car was really nice. It basically sat in the garage for 20 years. I finally told my wife to start driving it. It had a fantastic leather interior including the dash.
John F.
I

Would they learn from their errors designs by ''others'' for the next Cadillac roadster…….guest, ( only the shares holders count).

The XLR is definitively a better car then the Allante, because it was build in the US and the allante was import from Italia.

The allante was a front traction drive car and the XLR a rear wheel drive that is what most sports car suppose to be.

The allante was mostly an ordinary luxurious car with the Cadillac name plate on and not really a Cadillac.

The XLR power plan is superior from far, its a GM family car engineering in the old country and build in America on the c6 corvette fiber glass type body.
Contrary of the EVOQ steel body forecast by the GM administration, to build this EVOQ in order to stimulate the poor sales drop of the Cadillac.


The EVOQ was the real Cadillac.​
At least we can say that the XLR had the sales of all the Cadillac on a trend up even if the sales of the XLR did not last for many years.

See my thread on headlights replacement done today, it concern the rest of what you are saying.

Body only was done in Italy by Pinin Farina for the Allante. Power train and aALL the rest from Cadillac USA.
E

Would they learn from their errors designs by ''others'' for the next Cadillac roadster…….guest, ( only the shares holders count).

NO relation to TC and Lebaon. TC was the Q body and Lebaron J body. No body arts from TC would fit Lebaron. I have 91 TC and 93 Allante and 04 XLR 91 TC most dependable of the trio
B

The allante with chrome wire wheels makes so much a different then their regular painted silver wheel set.

Here is a photo that shows a such nice looking Allante.

Jesda said:
I've loved every front-drive Cadillac I've ever owned. Quality was poor but the comfort and driving experience were superb. Modern Cadillac interiors, including XLR, are missing the smell and touch that makes a Cadillac a Cadillac. I miss the smell and durability of Eagle Ottawa leather and the classy look of zebrano wood. The XLR, fortunately, retains the steering feel that's distinctly Cadillac.

The XLR's power top seems to be the least worrisome part. Video how-to guides and cylinder/pump refurbishers are out there charging reasonable prices (a grand or two). Everything with the top appears to be surprisingly easy to DIY.

The fuel sender, on the other hand, is horrendously expensive to fix for such a small part. I had three Sevilles with this problem -- you can get away with just using the trip meter to keep the tank topped off. I always filled up after 200 miles to be safe.

I am looking for a Florida or east coast mechanic to repair my 2005 XLR top. Caddie dealer says keep it up as sensors are unreliable and can’t get parts.
Z 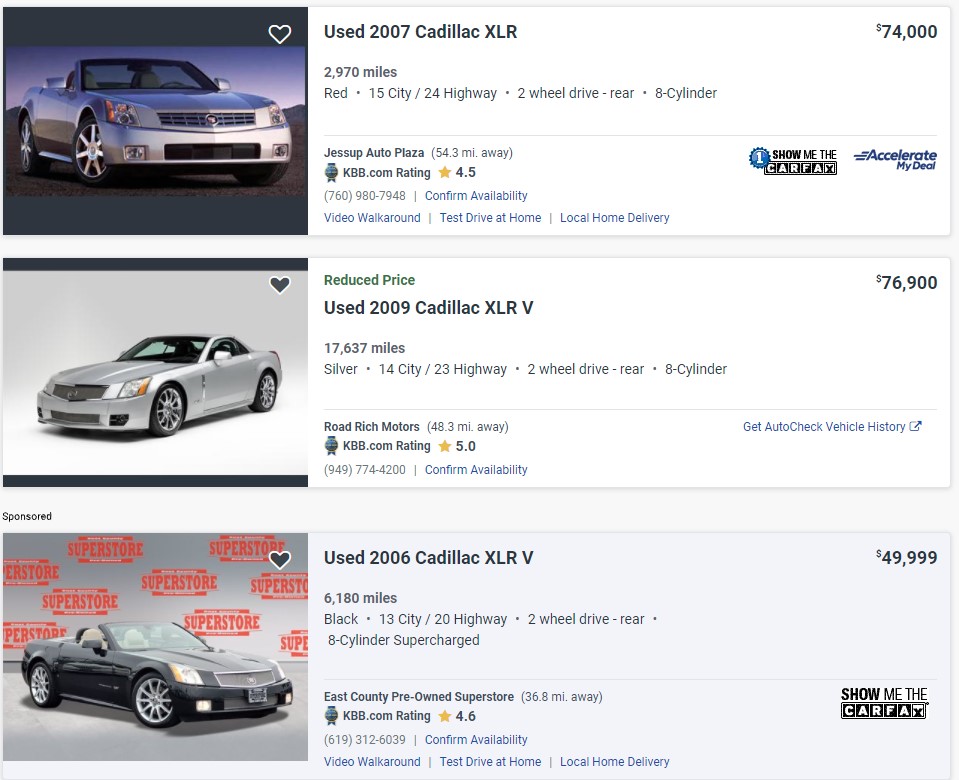 Been seeing some crazy prices where I live in SoCal (the land of nuts and as....) lately. Talked to a local Cadillac salesman; seems wealthy foreigners like XLRs. Now I'm driving around with a for sale sign on my XLR.
You must log in or register to reply here.