We have a good sized international auto show for new cars in mid January every year. I haven’t been in a while, but last I went Cadillac had a display and once I even ended up buying a STS that was in the show. I checked out info online on this year’s show because my son is interested in going, and was shocked to see Cadillac isn’t part of it as it isn’t shown on the floor plan.

Then I started thinking, “what could they put in the show?” They’ve discontinued the ATS, XTS, & CT6. The CTS is lame duck pending the creation of the CT5. So, the only current models they could bring that will actually be made going forward are the Escalade, XT5, & XT4. Ahhh, now I see why they aren’t in the show...

What’s scary is this lack of product is not too different from GM’s bankruptcy days, when they had only the CTS & Escalade & threw the XTS out there because they had nothing else in the pipeline. I’m not sure how much de Nysschen is responsible for this as opposed to disarray at Cadillac/GM generally. But it doesn’t bode well for Cadillac’s survival.

I will throw out that I recently did what I said I wouldn’t do & got an ATS coupe - wanted an American brand car before they all disappeared in favor of SUV’s/CUV’s. The fit & finish inside and out are miles beyond any of the three daily driver Caddies I’ve had since 2004 (CTS, STS, CTS coupe). I haven’t found anything out of place. It has a super smooth transmission & great acceleration (engine is the 3.6), & handles like it’s on rails. That said, it is small inside & out even as compared to my CTS coupe, the sporty ride is very stiff & jarring (may improve once I burn up & replace the run flats), & CUE really is quite an Achilles heel. So, the product is noticeably improved though it’s not selling, with overpricing likely part of the problem. Also Cadillac hasn’t lost the “bargain luxury” label when you’re the second owner of a low mileage one!

What do you guys think about Cadillac’s future?
[SIGPIC][/SIGPIC]
yep, I drive a hybrid - a V8 bred for high speed! 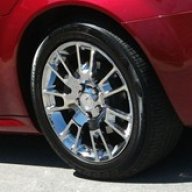 I am hoping for the best! As you said: they have not done anything truly new but they still have a loyal following..... Who knows?!?
Sandy
You can't be a car collector with only one car!
Get out & drive 'em.... 'cause if you don't - the next owner will !
My XLR: A fast Red one w Corsa Exhaust & V sway bar

I was at the dealer talking to a tech and he had about 50 radio heads on a bench all warranty replacements (about 2500 each) plus headlights full of water and he was replaceing new shocks on a 16 model with 12000 miles. Seems like they are going to have to step up the quality to remain in business.

I just spoke with Cadillac. Half the parts are on back order, the other half have been discontinued. sorry


long Tall Sally said:
I just spoke with Cadillac. Half the parts are on back order, the other half have been discontinued. sorry
Click to expand...

long Tall Sally said:
I was at the dealer talking to a tech and he had about 50 radio heads on a bench all warranty replacements (about 2500 each) plus headlights full of water and he was replaceing new shocks on a 16 model with 12000 miles. Seems like they are going to have to step up the quality to remain in business.
Click to expand...

CUE (Crappy Useless Emptiness) is a dog, although from the mounds of car magazines at our house with reviews of new cars, all manufacturers are struggling with that stuff to some extent. Most dealers with warranty work (in my experience) are just going to replace things completely instead of trying to fix them - so you end up with the 50 radio heads. I haven’t had problems learning how to use CUE, & I really don’t mind the haptic touch HVAC etc controls. In fact I currently have a 2019 XT5 loaner, & the HVAC controls have been changed to toggle switches. You’re still going to have to look at the switch until you learn what is where by feel. The haptic stuff is no different, maybe better now that I’ve gotten used to it because I know something is happening when I get the feedback.

My CUE switches up minor infotainment stuff from start to start, easy enough to resolve by pushing a button to get back where you want, or by turning CUE or the car off for a “reset.” But it’s aggravating. I happen to like the rest of the car enough to somewhat overlook that, but most people wouldn’t - & certainly not Cadillac’s target audience.
[SIGPIC][/SIGPIC]
yep, I drive a hybrid - a V8 bred for high speed!

parts are already on back order for the 2021 xlr replacement or discontinued. that is a joke. Its like they are dropping support on it even quicker than they did on our cars.
You must log in or register to reply here.

Press Release: Posting my Review on the King Penn Wind Deflector for those that may have an interest in purchasing!