My XLR refused to start after disconnecting the battery to remove a malfunctioning hydraulic top pump. In researching the starting circuit (in the service manual) many discrepancies were noted, but a “no crank” condition boiled down to the proper operation of the underhood Crank relay, #43.

This is a little, 4 pin, “Ice cube” style relay. Testing these enclosed relays requires removing the case.This results in a broken case, so getting a spare relay is required ($10.00 new, or $1.00 at a wrecking yard). Upon replacing the original relay with a caseless one testing proceeded. Closing the contacts resulted in proper starter operation, so it was time to look at the power to the coil.

With this information another attempt was made to start the car. When the lights went out on the Instrument Cluster (the normal pause when the start button is pushed) the Crank Relay contacts were manually closed by a helper, and the engine roared to life. The tachometer worked, but the Fuel, Oil Pressure, and Temperature gauges were at zero. Searching through the schematics revealed all of these sensors were directly fed into the Engine Control Module.

Now the question is, has the Engine Control Module lost its brains (needing to be reprogramed) or is it time to replace it? In checking for replacements it appears that these require re-programing by the dealer, or part supplier, to function properly. Does anyone have experience with this? 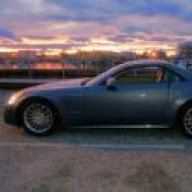 hey tinker,
was the display ok before you installed the new battery?
several people have had issues after installing a new battery, car doesnt want to "wake up"
myself included.
once you get it to start normally everything is fine again.
read here
https://www.xlr-net.com/forums/cadi...-2005-xlr-dead-battery-multiple-problems.html
T

The thread you suggested was reviewed prior to this thread being posted.

I wasn't installing a new battery, just disconnecting the current one so that work could be safely accomplished while removing the hydraulic pump. Once the starting problem occurred the battery was connected and disconnected in an effort to clear any problems with the car's electronics. Nothing helped. It should also be noted that a Digital Voltmeter was placed across the battery connection terminals to monitor any possible voltage fluctuations during the start sequence. The meter didn't display any changes, but because it takes several readings and averages them together before displaying the result, it might not really show a rapid dip, or surge, in voltage. To insure any voltage changes didn't occur, that the DVM couldn't capture, an oscilloscope was used to retest the battery voltage. The oscilloscope is capable of capturing even sub-microsecond changes. There were no changes captured. The battery isn't the problem in this situation.

The Instrument Cluster gets its data from the ECM, so unless the ECM is sending data, the instrument cluster can't display it. To help clarify why it's felt the ECM is the source of the problem the gas pedal seemed less responsive than normal. This typically occurs in "Limp Home" mode when the ECM thinks there is a problem with a sensor. Yet "Limp Home" mode always allows the car to start, whereas, in this situation, it won't.
T

When the Tech 2 was hooked up it indicated communications problems with the GMLAN. It turned out that the lack of communication to the ECM was the problem, not the ECM itself. The embarrassment relates to why the GMLAN wasn't functioning... Connector C437 (a small 3 pin connector made of black plastic) was hidden from view in the trunk's left compartment (read Black Hole) where the hydraulic pump is located. This in-line connector had been separated to facilitate removal of the pump, and lost amid all the other wiring and hoses. This connector ties the Vehicle Communications Interface Module (VCIM) to the Suspension Control Module (SCM) at the head of a long string finally ending at the Engine Control Module (ECM). So the lesson to be learned is to never attempt to troubleshoot an XLR without a Tech 2 diagnostic tool, and remember to reconnect everything that you disconnected in working on anything.

thats great! you are digging into the XLR quite deeply, something like that could easily be missed. glad it worked out.
You must log in or register to reply here.