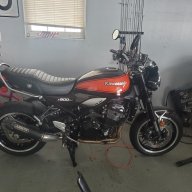 I contacted an estate sale over 1 month about for shits and giggles about an Escalade. Then I find out they had this funky looking 2 door Cadillac in the garage. After communicating with the estate handler for a week or so I assumed the deal was dead. After 3 weeks of no communication I received a phone call around 830pm. I was told the Escalade sold but if I wanted the XLR it was still available. Long story short, we were THOUSANDS AND THOUSANDS of dollars apart so I tossed a number out there thinking the conversation would end..... Next thing I hear is, "can you bring cash?" A week later, 330 miles each way. I own a 2005 XLR that needs some work. It has sat for at least 3 years but she runs now. First oil change was today. Topped off the coolant. The nail in the front tire was pulled and tire repaired for the time being. I'm heading back to the U.P. tomorrow to pick it up as I had to wait for the legal paperwork to be finalized. Then I'll be heading back this Sunday with her. Lots of work to do but it should be interesting.

A side note, this is my first Caddy. I actually have never seen one of these in person until I went in person to look it over. Also, I come from the vintage bike scene even though I'm 39. I usually find and redo Kawasaki Z1s, Honda CB750s, Kawasaki kz900/1000s. Rarest bike I had in my possession has been the Sandcast.
Last edited: Mar 17, 2021

"Let your plans be dark and impenetrable as night, and when you move, fall like a thunderbolt." - Sun Tzu
J

Congratulations. Tell us more about the car---

I'll share more about it once I pick it up. As of now I'm under the assumption it's a one owner vehicle with 75k miles. I assume 1 owner because my friend has a dealership, ran the carfax and he said it checked out and if I passed he was going to purchase it. I ordered the Bilstein suspension setup. I have a tranny pan drop, filter and fluid change set up for Monday. The stabilitrack service is reading across the dash. I'm hoping it's due from sitting for 3 plus years and the ecu needs to be reflashed. The trunk wouldn't open, nor would the top but I'm assuming that is due to the battery being dead for so long the system needs to relearn?? Or the fact the battery is from 2014..... At least that is what I am hoping for. The battery has been charged and the trunk now opens so there is some progress. The driver door won't open from the outside! I plan to remove the two screws, clean the contacts and see if that helps with that issue.. Yep, some early issues already but for my purchase price, I'm not complaining.
M

most likel yparked due to mositure i nthe suspension module and the top control module .you state you are going with the bilsteins and I guess the casper sims? they wont work or do any good unless the suspension control module is working . At least the shocks will give yo ua good safe ride. A good strong battery may help with all the electronics . Wealth of knowledge can be found on the forum and it sounds like you enjoy working on cars so you will get a lot of joy working on this one. You can check the vin on the registry and if your car is not there let the forum know .it most likely will be.

Second, is how the suspension does need to be replaced. The shocks are toast. Good part us I did order the C5 Bilstein set up.

Third, the Stabilitrack warning is gone. The Traction control can be turned on or off by the switch.

Fourth, I was able to somehow get the top to work. This is a huge win! A lot of my budget was allocated to this as I purchased it with the assumption it was non operative.
Lastly, I cleaned the door handle and that is operative now. I'm getting very lucky as of now.
M

sounds good .dont get too happy yet. that fuel gauge can mean a tank drop and about 1500-2000$ in labor cost to replace the pumps. its a biggy. look into some of the comments about running techtron I think its called fuel cleaner .I have not read were any of the people with the problem that were going to try it ever came back and either said it worked or not .door handle are a known easy fix as you found out. Glad to hear you got the top to work .I highly recommend you replace the struts that hold the trunk up . They help with the top and can put a lot of extra work on the pump when worn. Since it was sitting a long time. look into replacing the top fluid. not hard to do just a few cycles with a baster to remove and replace .
You must log in or register to reply here.

A
NEW here! I'd like to introduce myself and a little about my totally customized XLR